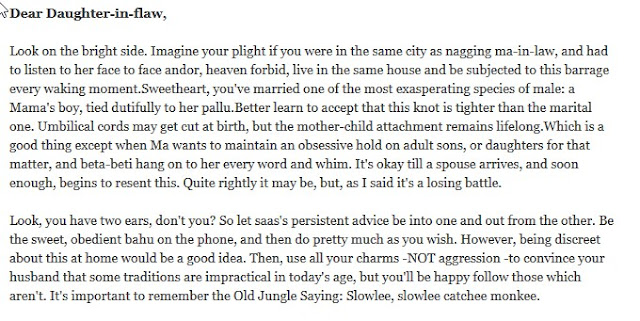 Every once in awhile I take out my RedPill Lens and read the mainstream columnists who write on relationships, give advice about it etc. It’s a good dose to remind myself how steeped in feminine primacy the modern society actually is. Also it helps me to gauge how far I’ve come from my BluePill days of identifying with the feminine on every fucking chance just to get  ..well a good fucking.


In the end my goal is to make note of these feminine first defaults of culture and talk to fellow men(probably save lives) on how they must navigate the sexual market place in this post radical feminist culture. The goal is not to prove to myself or anyone else how right I am or how evil women are any of that, because 1. I know she will get away with it and 2. Being right serves no purpose on its own.


A few days back, it was Bachi Karkaria.

As you have read, our dear daughter-in-flaw is really a flawed human. She has problems with the husband talking to his own mom on the phone. And she has problems with the fact that traditional values are being expected of her(most probably she’s pissed off that anyone dare expect anything at all from her, haven’t they got the memo on what a favor she’s done on the universe by being born with a vagina).


Next she tells us how the old mother in law has high BP and is fucking afraid of dying all the time, what a fucking pussy right. Being old and having health problems and scared of death is just overacting in our princess's book.


This is the first sign of an feminist princess aka the girl you should fuck(in the ass) but never marry. This is female solipsism. Everything is about her in this universe and an old woman’s fear of death and never seeing her son again is a nuisance, just like those YouTube ads when she’s streaming repeat episodes of MTV splitsvilla. Yes we all have seen men who take their mom’s permission before spending anything from their paycheck but this certainly is not that case. She’s in a different city and still can’t stand her husband talking to her own mother. Zero empathy for anything not directly useful to her and doesn’t add to her pleasure.

You’d expect someone who is also old and probably has high BP to sympathize with the mother in law. All that “only a woman understands another woman” BS they go on about every chance they get. Now you know that is only true in the feminism’s mothers and its daughters circles and here she has a traditional values witch troubling one of her little princesses. She immediately reminds her how lucky she is to not be under the same roof with the old witch, if that wasn’t the case I’m sure the later line would have been “Then, use all your charms*-NOT aggression -to convince your husband to move out”.

* = no, its not objectification when its used to manipulate men with sex for one's ends


The best part is her ruthless dismissal of the poor beta boy “Sweetheart, you've married one of the most exasperating species of male: a Mama's boy, tied dutifully to her pallu.”


To understand this better we must now invite in our mists another global feminism’s mommy, the future ex-COO of Facebook as someone has called her. Bachi can use her following quote for half of the chicks who write to her about how naughty they have been fucking around in college.


“When looking for a life partner, my advice to women is date all of them: the bad boys, the cool boys, the commitment-phobic boys, the crazy boys. But do not marry them. The things that make the bad boys sexy do not make them good husbands. When it comes time to settle down, find someone who wants an equal partner. Someone who thinks women should be smart, opinionated and ambitious. Someone who values fairness and expects or, even better, wants to do his share in the home. These men exist and, trust me, over time, nothing is sexier.”


― Sheryl Sandberg, Lean In: Women, Work, and the Will to Lead

It’s safe to assume that this what our princess here went with and Bachi, Sheryl and Betty all smiled. And now a little twist came in there which is kind of a hiccup. You see the plan was to end up with a wife’s panty washer and not the mother’s pallu holder. But fret not I’m sure she’ll use her witholding-sex-technique charms and soon fix that as advised.


Also notice how a caring, loving man is the laughing stock for the very same women as “mama’s boy” and "the pallu holder", who always claim that all they ever want in a man is for him to be a caring, loving, good father material human being. Learn and remember this now my dear brothers that what they left out is that the “caring loving good boy man” is wanted but after they’re done with “the bad boys, the cool boys, the commitment-phobic boys, the crazy boys” in their younger, prettier party years. Alpha Fucks, Beta Bucks gentlemen.


And how wrong the “These men exist and, trust me, over time, nothing is sexier.” turned out to be. My one theory is that this whole thing wouldn’t even be a problem if the guy just maintained an average sculpted physique and could give it to her like she really wants it. It’s because of the absence of it she gets time to worry about “how much he talks to his mom”, “how the curtains look old”, “whether vishal or ajay should be the king on spiltsvilla”, “how the kids need to put newspaper on the dining table before eating so the table cloth doesn’t get dirty”. .(yes in their own fucking house).

The poor man at last. If we were to play the childhood game where you add a fixed word at end of the movie title and the whole thing just sounds stupid or meaningless we could do that to this guy’s life decisions too. The phrase would be  “— not appreciated”.

“I think what most men uniquely deceive themselves of is that they will ultimately be appreciated by women for their sacrifices. Learn this now, you won’t. You can’t be because women fundamentally lack the ability to fully realize, much less appreciate the sacrifices a man makes to facilitate her reality.”

He left his parent’s house to go work in a different city for that extra 10k for the “both of us”—not appreciated. Infact he probably also left because he sensed that the “fuck tradition” empowered gal he’s got won’t want to live in a joint family—not appreciated. He must be trying really hard to tone down talking to his mom because it pisses the princess—not appreciated. After all these years he now probably realizes(as all of us do) how much his mother did and sacrificed for him and being away he just misses her—not appreciated. He has now become the loving and the kind man the feminine imperative told him women always wanted—not appreciated.

Just not fucking appreciated.
at 11:10 No comments: Links to this post