The Cuntsplainer of the left liberal

The way this woman makes my fucking blood boil. That fucking shrill voice when she goes “so you’re saying white men ..blah. blah..” (at 1:08) and the shaky movement with “you literally did, you literally did” (at 2:05-2:08) she does and the expression on her face with the eyebrows raised and that pause while doing it. JESUS FUCK, this cunt. 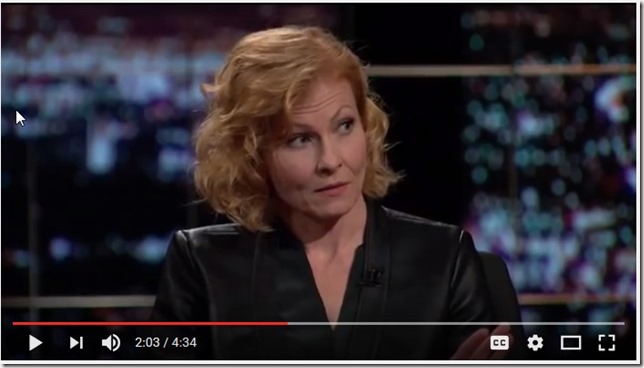 Bill brought up ISLAM and Political Correctness along with the topic of white evil men, but we just how they just latch on to the one thing, the one thing on which she’s sure that the majority cultural discourse is on her side, it’s like she’s just focused on winning the argument somehow and not even care about analyzing a point put forth for her. That’s how clouded she is by her man hate.

Notice her hand gesture too, so obvious she’s not even giving an inch of thought to the words which came out of Bill’s mouth and just brushing away and has her anti-white-male response ready already loaded.

And they tell us we’re mansplaining, this fucking cuntsplainer. 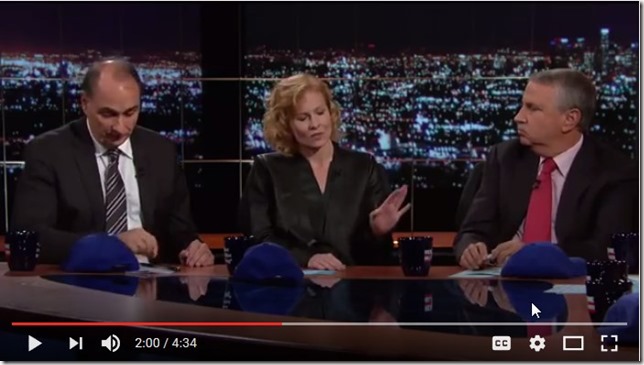 Think about how can one have a pre-canned responsed loaded when you are put forth an unexpected question, don’t we all take a pause, to think, to reflect and then talk slowly enunciating our words and so on, but not this one. Because she’s so fucking sure that everybody is going to agree with anything she says against white man, again comes back to her belief of having won the cultural war.

She’s the absolute fucking worst of the liberal left, the fucking poision which ends civilizations because cunts like her just can’t, just fucking refuse to sit and take a deep breath and discuss and analyze a point with you, and instead just fucking wait, they wait for you to say a word or a sentence which they disagree with and which they think are certain that the current culture discourse disagrees with.

I say the “current culture disagrees with” because MAKE NO FUCKING MISTAKE, the left-liberal-feminist-PC-SJW shits really fucking thought all along they have won the cultural war, and that folks, that’s what gives her the confidence to so openly bash white men with such fucking smugness of her eyebrows raised, fucking man hating whore this one.

You can go back and watch the video again, see how she expects, just expects everyone to juuusst agree with her, and her tone and expression is one of “c’mon we all know white men are such shits, what’s there to discuss or analyze here”. It’s that expression and her deep belief which really makes me breathe such fire towards her and her kind.

Notice Bill’s initial reaction. I think inside he was just going “YOU DUMB FUCKING WHORE FUCK YOU LIBERALS, I AM GOING OVER TO THE TRUMP SIDE, FUCKING FAGS ALL OF YOU”. 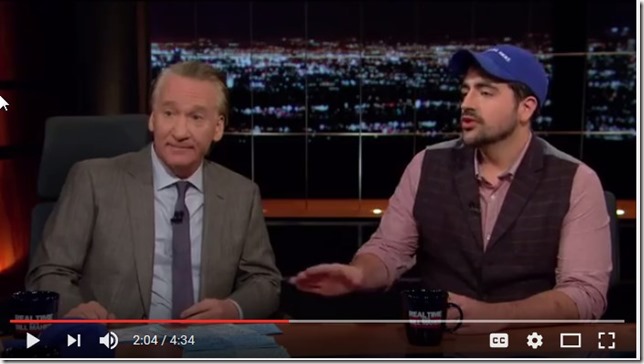 And I’m also sad that the culture is come to this. I am not even a white male but a guy from India and I see this very same man hate being imported here as well. We now have people among us, both men and women who hate the very idea of heterosexual masculinity so much that they don’t even bother to hide how blindly hateful they are just because they think there are so many of them.

This cultural hate affects our lives in so many ways. I for one can’t imagine raising kids in this culture, for one what kind of woman would you choose to be with when the most educated of them have such worldviews. Imagine your son being taught since day one at school how horrible he is just for being him.

For now the tide seems to be changing with India’s election which brought Modi to power, then BREXIT and most importantly, Americans took back their country with TRUMP.

We can’t rest though. Reminds me of Will Durant quotes on India’s fall to invaders:

“The Hindus had allowed their strength to be wasted in internal division and war; they had adopted religions like Buddhism and Jainism, which unnerved them for the tasks of life; they had failed to organize their forces for the protection of their frontiers and their capitals, their wealth and their freedom, from the hordes of Scythians, Huns, Afghans and Turks hovering about India’s boundaries and waiting for national weakness to let them in. For four hundred years (600-1000 A.D.) India invited conquest; and at last it came. This is the secret of the political history of modern India. Weakened by division, it succumbed to invaders; impoverished by invaders, it lost all power of resistance, and took refuge in supernatural consolations; it argued that both mastery and slavery were superficial delusions, and concluded that freedom of the body or the nation was hardly worth defending in so brief a life. The bitter lesson that may be drawn from this tragedy is that eternal vigilance is the price of civilization. A nation must love peace, but keep its powder dry.”

“…the Islamic conquest of India is probably the bloodiest story in history. It is a discouraging tale, for its evident moral is that civilization is a precious good, whose delicate complex order and freedom can at any moment be overthrown by barbarians invading from without and multiplying from within.”

The liberals have serious guilt and contempt for the achivements be it of their own race, the male gender and at times as I have learned from PETA activists their own species. They have a guilt that they probably don’t deserve all the good they have and feel that the only way to redeem themselves is by sharing what they have with those who have always been victims in their narrative.

To meet this deep psychological need they will even hand over their countries to third world islamic savages to rape and kill. And that would be the end in which we all would be equals—in our collective misery.

Civilization is a precious good, eternal vigilance is the price of civilization.