A Pang of Nostalgia and Apprehension 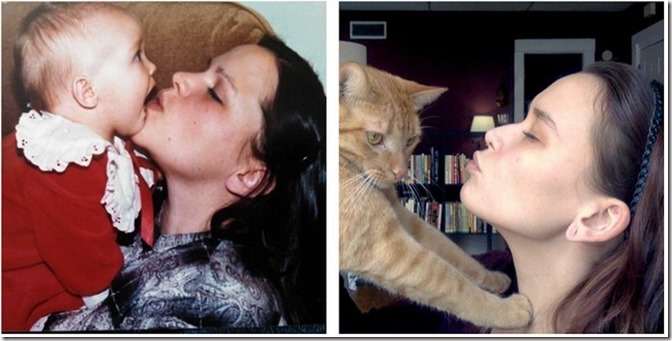 Don’t be surprised if a pang of nostalgia and apprehension arrests you. The future of your nation and your people is dying before your eyes in a swirl of solipsism and baby substitutes.

I am a big fan of his writing style. And I do feel a pang of nosta lgia and apprehension on looking at this pic. I have always loved kids, the innocence, the cooing, the smiles and the wet kisses. There’s hardly anything to not love.

But his complaint that the future of white people and America is in danger because now we have a psychotic ideology pushing women towards cubicles and boardrooms instead of cradles and breatfeeding seems headed in a wrong direction.

Obviously the pic on the right is not enough to make a judgement on the lady but keeping line with the context I’d say that if hyper liberal women swallowing the feminist dogma choose to fill their life with cats instead of babies that’s probably a good sign for the country and the world.

I don’t know what the complaint exactly is about. He daily dismantles the left liberal’s shitlibs and their anti white and anti america rhetoric and then goes to complain about the very women not having enough white babies. That’s just asking for more democrat voters.

The idea that all women should have babies is equivalent to the meme that “everyone should vote”. That is obviously a very bad idea. That would have been a good thing if every voter was a thomas sowell fan and reader. And that is never going to be a case. We already have a culture of eternal victimhood and virtue signalling in the name of the poor, women or minorities. By making sure everyone votes, most people will only fall back to voting left.

A second line of argument to make is to ask if everyone is even fit to have kids and wants to?

It is true that children are amazing to be around and there’s a lot about them to love, but that simply does not mean everyone should go for it or that everyone should want to.

The thing with nostalgia is that the idea of the past, the good old days, always elicits an emotional response in human beings. Probably because of the simple fact that we cannot go back to it. That is no argument to claim that the past was better than the present.

And wanting kids is a even bigger question everyone needs to ask as soon as possible. Whether you replace that with cats or career is not point. In fact it would be tragic is one were to blindly follow down the parenthood road just for sake of their people and country.